Everyone has some version of spring cleaning. But, if you live with all the humidity and dampness of the island, there is a winter accumulation of mildew and mold that does not happen everywhere.

So, spring cleaning time is not just an indoor activity, but involves major outdoor power washing. 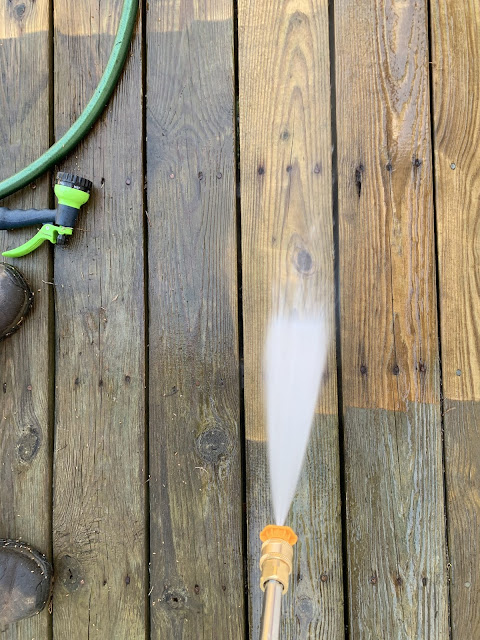 Our house and garage apartment combined have: the ramp up to the garage, two garage and apartment decks, walkway from the garage to the house, three house decks, wooden driveway, two wooden walkways, and the hot tub. All of these areas are major mold factories during the winter and preservation of the wood plus removal of slippery surfaces is only accomplished by power washing.

When we started this spring we discovered that our old power washer had died since last year.  So, a new purchase was in order.  We learned long ago that the more power the better, especially where cleaning time is concerned.  So, we now have 3,200 psi at work. 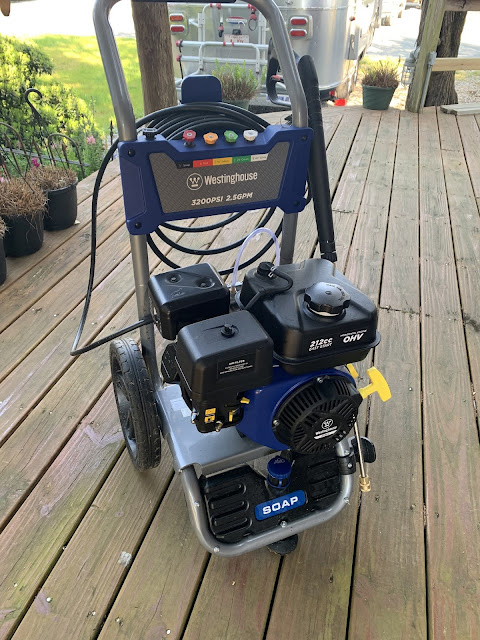 The best thing is that it is fun!  Nothing as fulfilling as doing a job where you really see the results. 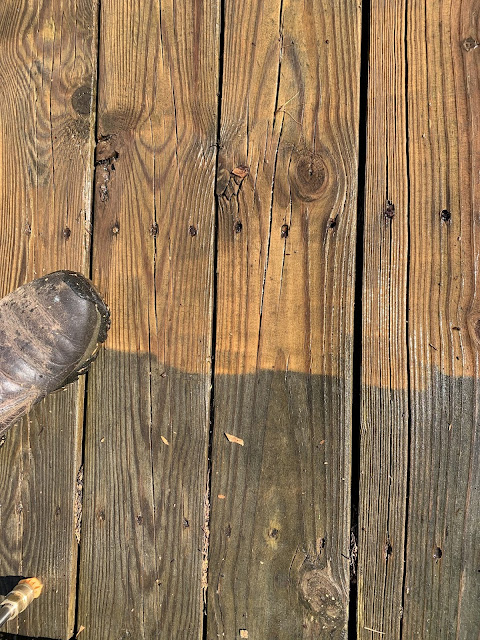 It is so much fun to watch things grow.  Trish and I love planting flowers and vegetables all around the inside and outside of our house.

Right now we have an active little mushroom farm where we are growing pink oyster mushrooms to eat. 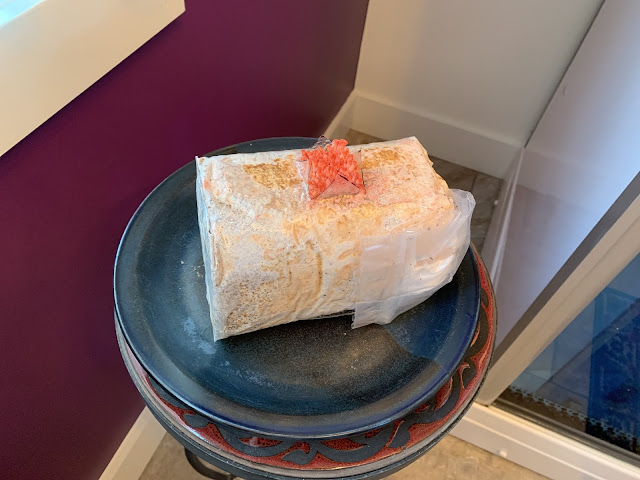 We have then in our main bathroom where they can take advantage of the humidity not get direct sunlight. The photos shown here follow a seven day growth period.  At the end, we picked the mushrooms and had a delicious dinner of eggs scrambled with onions, mushrooms, and cheese! 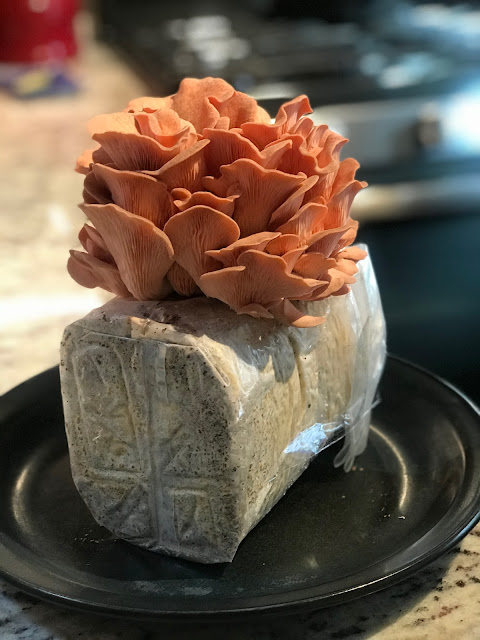 Things that you grow yourself taste better!

On our way back from Portsmouth to Ocracoke we made an offshore visit to Beacon Island, a major breeding ground for brown pelicans.  In the 1950’s and before this island was totally covered with nests of breeding birds.  When DDT became generally available for agricultural use following WW II, the pelican population began to drop.  The insecticide made their eggs soft and sterile and new hatchlings were few.

By the early 60’s there were only three breeding pairs of brown pelicans here and the entire species was endangered. 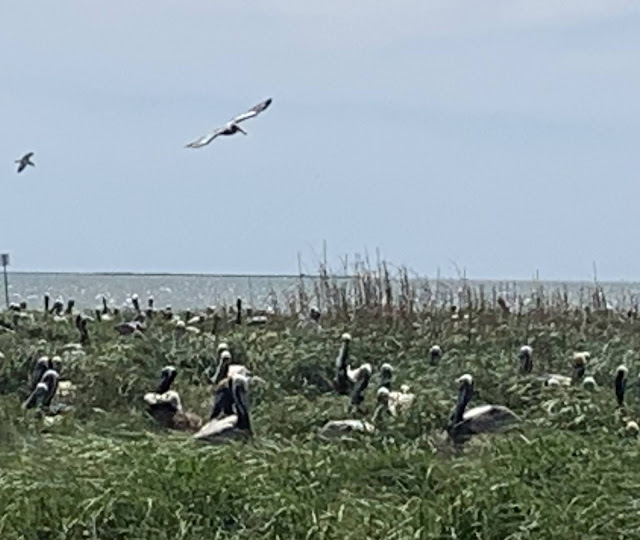 The Endangered Species Act of 1973 outlawed the use of DDT totally and the pelicans began to return.  Today their numbers are difficult to count they are so wonderfully numerous and they are no longer in danger. 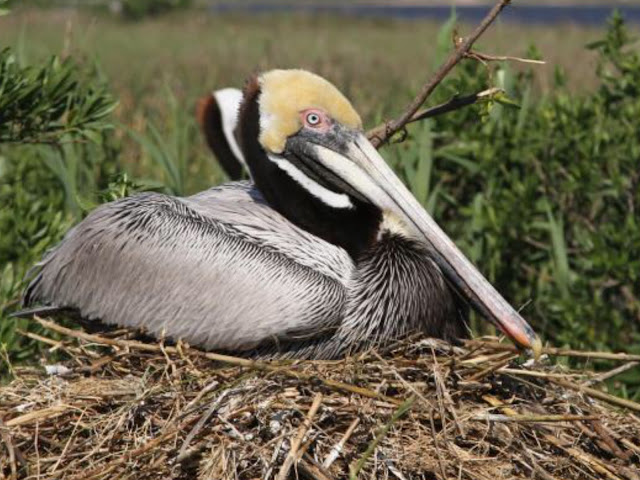 We circled the island and watched the parents and their babies crowded around their nests.  The parents go out and catch fish, then bring them back and feed the babies until the babies are big enough to fish on their own.  There were also ibises and oyster skimmers to be seen nesting among them. 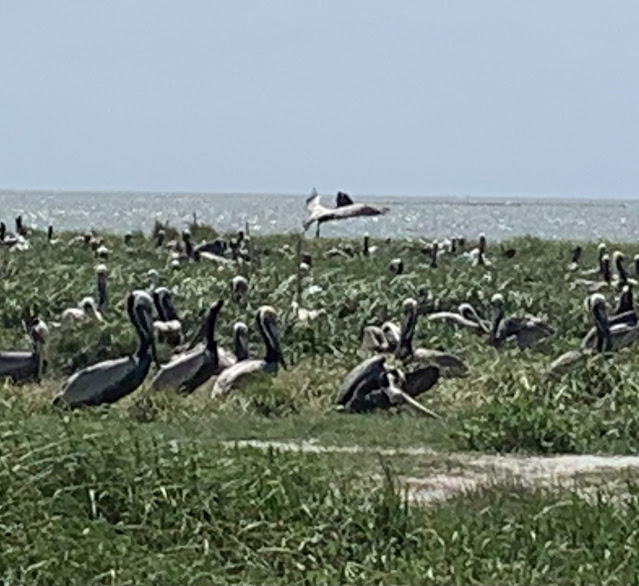 In the eighteenth and early nineteenth centuries Portsmouth was the largest town on the coast of North Carolina.  Nearly eight hundred permanent residents lived on this island, just south of our island of Ocracoke.  Each year as many as twelve-hundred sailing ships unloaded at Portsmouth so that their cargoes could be transported across Pamlico Sound, a trip the large ships could not make due to the shallowness and uncertain channels of the Sound.  The village even had a hospital and a Lifesaving Station.

With the advent of steam and the gradual disappearance of the tall-masted sailing ships, the economy of the village faltered.  The Civil War brought evacuation following which many residents did not return.  With no jobs, children growing up sought better life on the mainland.

In 1966 Cape Lookout National Seashore was established and the village was part of that acquisition.  The few remaining residents where allowed to live out their lives there if they so chose.

By 1971 only three people remained, two women and one man, Henry Piggot.  When Henry died, the women left the island and Portsmouth has been a ghost town ever since.

With Jonathan and Kahran with us for the week, we went over to Portsmouth for the day on Friday.

It was a perfect day.  Moderate temperature and enough wind to blow the insects away.  We took a Picnic and had it at the old Lifesaving Station.  It was a great day.

We are very fortunate on the island to have the Ocracoke Garden Center.  It is located right behind the grocery-hardware-ABC store and less than a half mile from our house.  Lauren and Gloria take good care of us and the Garden Center gets beautiful plants for us to cheer up our homes.

Trish and I both love color and blooms in the yard.  We seem to take on different parts of the yard without making any plan to do so...it just happens! 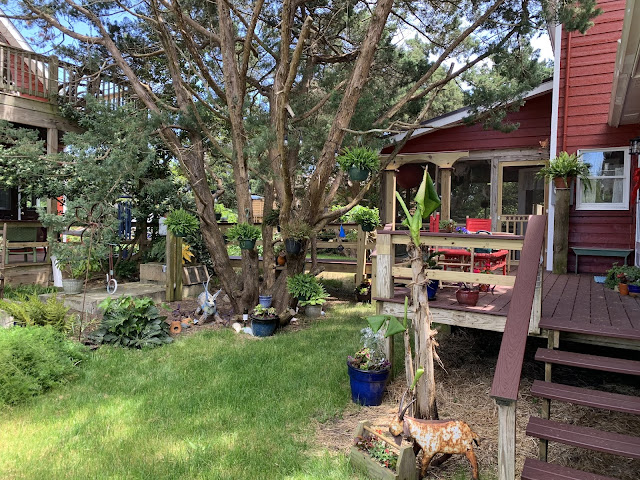 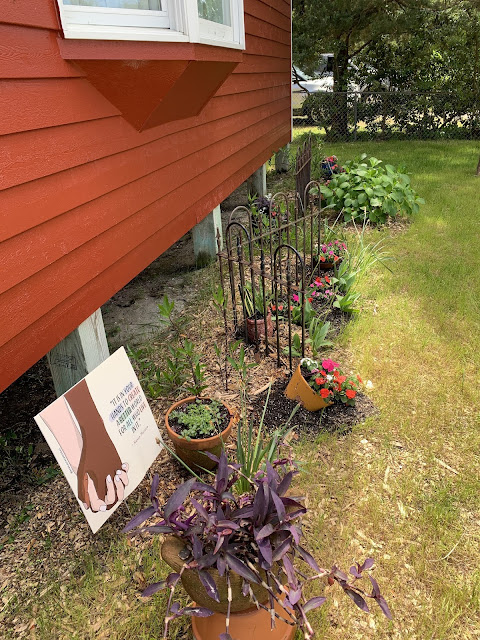 Our challenge is to see how long into the heat of the summer we can keep things blooming.  It is fun to try and very fulfilling when we have good results. 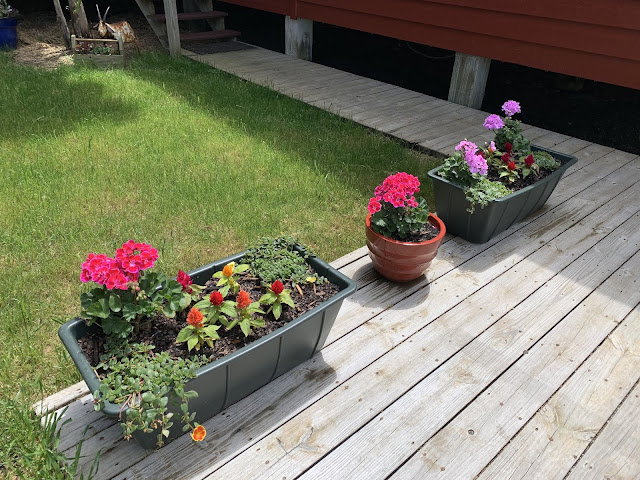 Our last stop on our trip to the mountains was to take Doug and Kelly and Jill to the Davis Chapel Cemetery.

Davis Chapel Methodist Church was built by my great grandfather, Francis McGhee Davis, and his sons about 1865 on land he donated.  It replaced the earlier brush arbor preaching place used by the traveling Methodist circuit riders.

Though the church itself is no longer functional, in his wisdom, Francis Davis did not give the cemetery land to the church in1865, but instead gave it to the community where it has to this day its own independent set of trustees.  It is still functional as a cemetery. 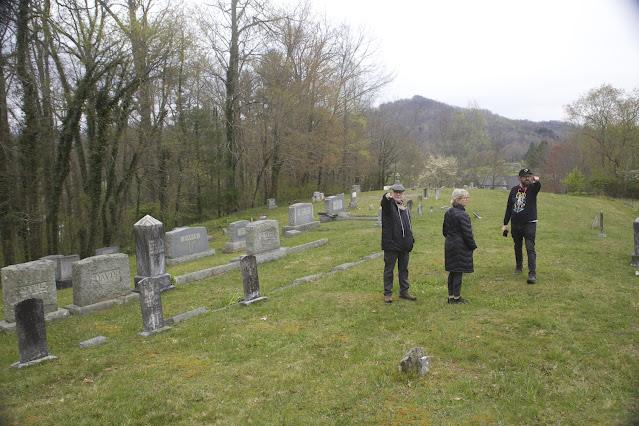 Our first relative to be buried there was my great great grandfather, Philip Davis, who died in 1875.  In the following decade my grandfather’s first wife, Nannie, and three of their five children came to final rest there.

As time past it became the final resting place for that grandfather, Joseph Davis, my grandmother, Ellie, several of my grandfather’s brothers and their families, and my Aunt Ruth.  She died  in 1932 of a brain tumor while a 21 year old student at Berea College. Francis Davis, who gave the land was himself buried there in 1903.

Trish and I are making plans to clean the stones as lichen growth has obscured the clear reading of engraving on them,  it was a time of our sons meeting with a piece of their past. 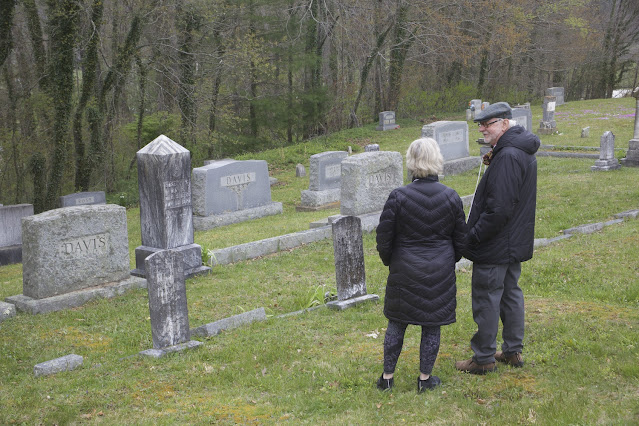 Fun With the Boys

Our son, Kelly, is in graduate school at Duke and presently doing a project on Family Migration for one of his courses.  Part of his work involved a trip to the family homelands of Haywood County, so, with our being there this past week and weekend, a trip to meet us was planned.

Kelly, his brother, Doug, and Doug’s wife, Jill, met us at the SWAG for hiking the Cataloochee Divide Trail one more time.  This ancient trail runs between lands where ancestors lived on either side.  It was both a Highway for their travel in the eighteenth and nineteenth centuries and the trail along which early Methodist Circuit Riders traveled when our family became early Methodists. 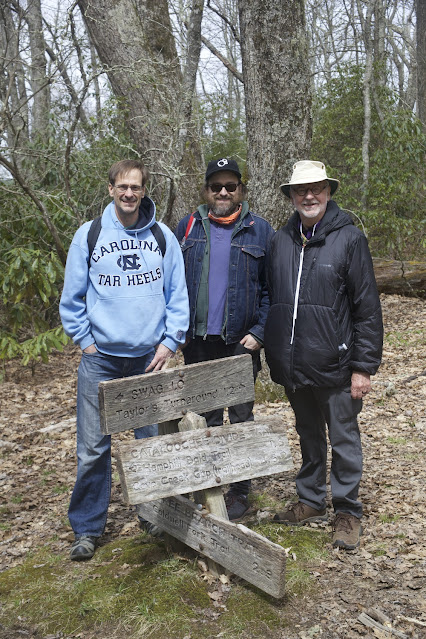 We left the SWAG, which is at the mid-point of the trail, and hiked toward Cove Creek Gap.  The trail runs along the ridge here. We then visited the NPS Nature Education Center and the old John Ferguson Cabin.  (Many of our ancestors on both sides of the family are Fergusons.) 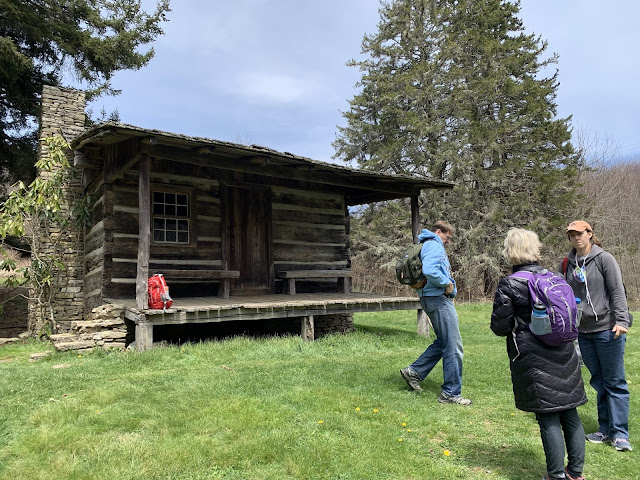 Returning along the ridge to the SWAG, we continued toward Hemphill Bald, passing two Cherokee trail marker trees on the way.  These trees were deliberately warped in early growth to make “signs” indicating upcoming intersections on the major trails. 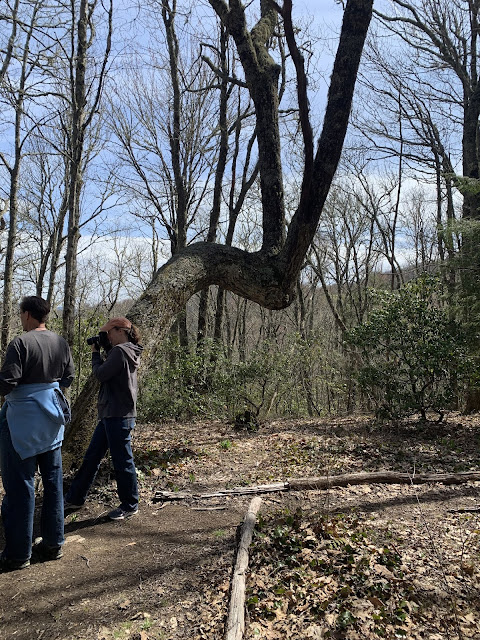 While Doug and Jill went to the Bald, Trish and Kelly and I circled around on another old trail and back to the SWAG.  We all ended the day there with dinner after which I told a story to all of the SWAG guests.  It was a great day!

Everyone has some version of spring cleaning. But, if you live with all the humidity and dampness of the island, there is a winter accumula...